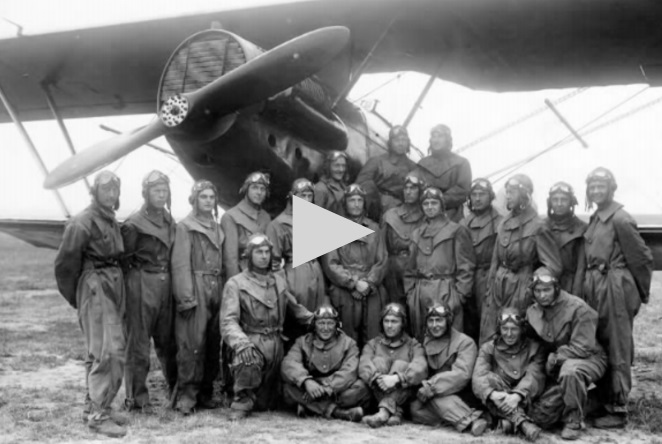 Scenes and stories from the Russian – Polish war front:

The heroic American pilots and their “Kosciusko Squadron” played a major role in the eventual defeat of the Bolsheviks during the Russo – Polish War of 1919-1920.

When the American pilots entered the battle in the spring of 1920, the hostilities between Poland and the Soviets were intensifying with the Bolsheviks making advances against the Polish forces. Poles and the rest of Europe feared that a Bolshevik victory would threaten the West, especially after a Russian general order was issued that read ‘ The fate of World Revolution is being decided in the West; over the corpse of White Poland lies the road to world-wide conflagration. On Wilno, Minsk, Warsaw… forward march!’

The arrival of the gallant American pilots and their inspirational “Kosciusko Squadron” electrified the Polish forces and dramatically improved morale and hope for the future.

The Americans flew over 200 combat missions during their year of service, which culminated with the end of the war. The Americans consistently attacked and caused havoc, delay and confusion among the major Bolshevik infantry and cavalry units.

Three of the American heroes were killed in action. They were immediately replaced by new American volunteer pilots from the States where the exploits of Cooper and the squadron, captivated and enthralled the fighter pilot alumni of WWI.

The American pilots had remarkable experiences and gained deep friendships with Polish soldiers, airmen and civilians throughout their campaign in Poland and Ukraine. There were romances with local girls and friendships with others, which they all took to their graves.

The Americans dramatically affected the outcome of the war. The war ended by Poland smashing the massive Soviet Army on the outskirts of Warsaw in August 1920. The Soviets outnumbered the Poles by 3 to 1 in the Battle of Warsaw. The whole world expected a Soviet victory thus increasing the danger to the rest of Europe. All foreign diplomats had left Warsaw in fear, before the battle even began, anticipating a Bolshevik victory.

The Soviet battle plan was two pronged. One million Soviet infantry were marching from the east directly west towards Warsaw under Soviet General Tukhachevsky. A fighting force of 250,000 cavalry, including the feared Cossacks of the steppes under the infamous General Budienny, was approaching from the southeast from Ukraine and planned to strike Warsaw directly from the south to coincide with Tukhachevsky’s infantry onslaught from the east.

The heroic defense of Warsaw by the Poles became known as “The Miracle on the Vistula”. One historian, rating all of the battles fought down through history, ranked the “Miracle on the Vistula” as the 17th most important of all time, because, had the Poles not triumphed, the Soviets had a pretty good chance of taking over all of Europe.

The mission of the American pilots was to disrupt Budienny’s cavalry and to delay its assault on Warsaw. The Americans succeeded. They raided, strafed and dispersed the Soviet cavalry so effectively that it was delayed by a few days from reaching Warsaw in time to join Tukhachevsky’s Soviet infantry attack, and thus contributing to the Soviet defeat.

Cooper was shot down, captured and imprisoned in a Soviet prison outside of Moscow during this successful assault on the Bolshevik cavalry. He escaped from the Soviet camp in April of 1921, many months after the war had ended, and made his way to Latvia, 500 miles away in just 14 days. During his harrowing escape, the Russian Army chased him all the way to Latvia. He reached Warsaw a few days later where General Pilsudski awarded him the Virtuti Militari Cross and the Cross of the Brave, Poland’s highest honors.

The Polish people erected a monument to the American pilots in Lwow, Ukraine (in 1920 Lwow was part of Poland). The monument honored the three American pilots who lost their lives in the air campaign and were buried there. The inscription read, “They died so that we can live free.“

The American pilots were honored as heroes, at the conclusion of the war in the fall of 1920, with a grand and glorious ceremony in Warsaw, where they were awarded Poland’s highest military honor in a ceremony at the Belvedere Palace, attended by the Polish Parliament and thousands of thankful citizens. Sadly, Cooper, at that time, was thought by all to be dead or left to rot and die in a Soviet jail.

After Marshall Pilsudski awarded the American pilots their medals, he saluted them in front of the thousands of their admirers and proclaimed…”Honor to You Brave Americans. Honor to You.“

After Cooper’s astonishing escape from sure death in the Soviet jail in April of 1921 (8 months after war ended), he received a hero’s welcome in Warsaw where Marshall Pilsudski personally presented Cooper with his Polish medals and the Polish Parliament awarded him a landed gentry estate. Being aware that Kosciusko graciously declined a similar offer from the American Continental Congress during America’s fight for its independence, Cooper also turned down the grant of the estate by saying that “the fight for liberty was reward enough.”

Genesis Productions, the cinematic arm of the Foundation to Illuminate America’s Heroes, is developing a theatrical film about Merian Cooper’s exploits with the Kosciuszko Squadron. A website for Genesis Productions is currently under construction.